After telling people we were going to San Francisco, we received many restaurant and activity recommendations.  One such recommendation was Crustacean.  I surveyed the menu several times before arriving in San Fran and was really looking forward to the crab. 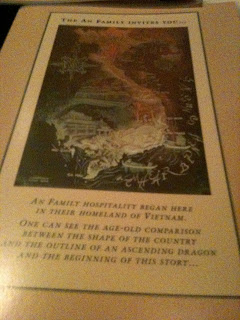 We were a little late to our reservation, but luckily we were still able to be seated.  Our waiter was extremely enthusiastic.  He recommended that we start with the Crispy Rice Paper Roll filled with chicken, mushrooms, carrots, mint and vermicelli served with daikon cole-slaw. 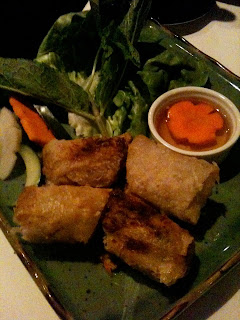 It was very flavorful.  And although it looked like an eggroll, it was much meatier and tastier. For our main course, we wanted to order the Drunken Crab an entire dungeness crab simmered in a broth of three wines, cracked black pepper and scallions, but he told us the Roast Crab an entire dungeness crab roasted with garlic and spices was the most popular dish, so of course that’s what we ordered. 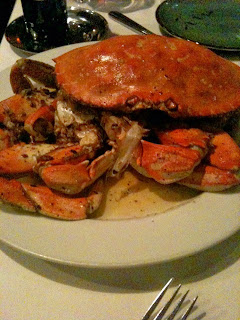 Look at that sucka!  We initially wanted to order two, but thankfully our waiter advised us to only order one.  We also ordered the garlic noodles, egg noodles infused wiht garlic sauce. 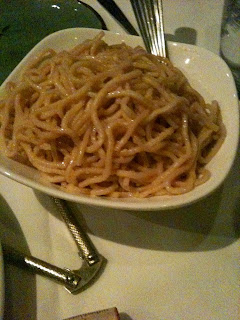 Mr. G and I started working on that huge crab while eating forkfuls of the noodles.  It was very rich and buttery.  One of the most exhausting meals I’ve ever eaten, but it was worth every last bit of effort.  After we sucked the crab dry and made sure no meat went uneaten, our hands were very greasy.  Thankfully, they brought us some hot towels.  Once we were clean, it was time to handle the dessert menu.  While we would have loved to order separate desserts, we had already eaten more than we should have. 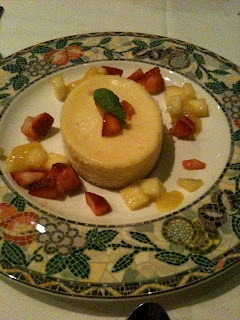 The lemon cheesecake with pineapples and strawberries won out.  It was pretty tasty, but I like my cheesecake plain so I definitely had to eat spoonfuls with fruit otherwise it would have been too tart for my pallet.  I highly recommend Crusteacean.  There are many other options besides the crab, but I think it’s worth trying the crab at least once!