After spending hours in Bloomingdale's assisting Mr. G as he bought a few new suits, I had worked up quite the appetite (and attitude).  Mr. G and I went to Cafe Ronda for what turned out to be a very enjoyable dining experience.

We were quite hungry when we arrived for our 9pm reservation so we quickly ordered several tapas.  It didn't take long for them to start arriving.  Rather than the order they arrived, I'll present them best to worst. 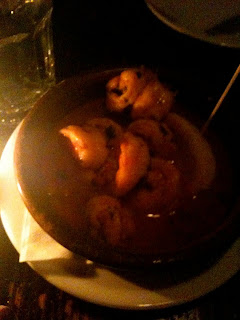 By far the most delicious, the Gambas al Ajillo.  Sauteed shrimp, EVOO, shaved garlic & red pepper flakes.  I was shocked that it was tomato based.  I expected it to be garlic and oil.  The shrimp was fresh and the sauce was spicy.  Even after the shrimp was gone, I dipped the bread in the sauce. 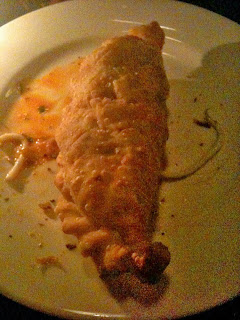 Next up, the chicken empanadas.  I have never eaten such a flaky, soft and tasty crust in my life.  Seriously.  Usually empanadas, to me, are about the filing.  Don't get me wrong, the filling was spectacular.  Spicy chicken, tomato based sauce, and possibly some potatoes. 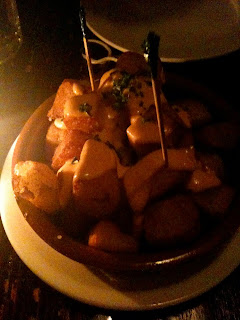 Speaking of potatoes, dish number three was Bravas, spiced rough-cut potatoes.  Bravas were fantastic.  There was something dripped on top of them.  I thought it was cheese, but Mr. G observed that it could have been a spicy mayonnaise.  Whatever it was, it was fantastic! 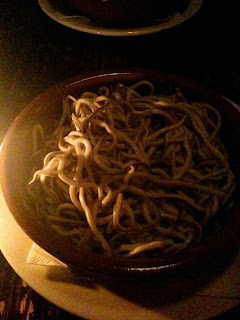 The Gulas (magic whitefish threads of airy angel's air in sizzling olive oil, garlic and red pepper flakes.  It was okay.  Not the best thing I've ever eaten, and I probably wouldn't order it again.  It tasted fine, but I feel like if I was eating brains, this would be the consistency.  Hey, I'm just sayin. 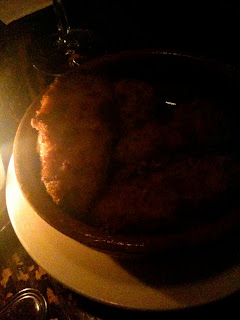 Last and definitely least was the most disgusting thing I've eaten in a long time...Mejillones Rellenos (crispy stuffed creamy mussels).  Simply put, they were gross.  Deep fried top, bottom was mussel shell, middle was mixed creamy crap.  How can you serve something that's both hot and cold? YUCKY.  I could barely even take a bite. 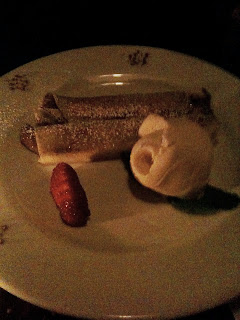 Dessert doesn't count on the list.  Panqueques de Dulce de Leche (milk caramel crepe with vanilla ice cream).  It was amazingly delicious.  The waiter told us this was their most popular dessert, and I definitely can see why.  I'm not a big crepe fan, but it went well with the hot delicious caramel and the cold tasty ice cream. We'll definitely be going back, but there are plenty of tapas places to try so it may be a while before we make it back.