After such a long week, I wanted nothing more than to relax tonight and do nothing, that included eating.  Luckily Mr. G knows that if I don't eat I become very cranky so he suggested that we go out for dinner.  We walked around his neighborhood looking for somewhere we had not previously eaten.

We finally settled on Fusha.  It was just warm enough that we were able to sit outside.  They have a sprawling outdoor area that takes up two store fronts.  The hostess escorted us to an area where we sat near a couple that had a dog.  This was one of the most popular dogs I've ever seen.  Almost every other person that walked by commented on the dog or stopped to pet it.  It's not that I don't like dogs, but geez give me a break, why are you touching a stranger's animal?

Our waiter took fooor-eevvv-errr to take our order.  Then he took even longer to bring it out. 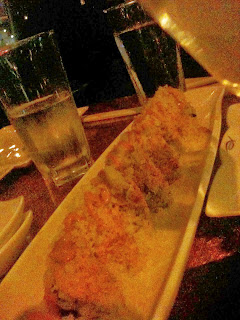 I ordered the Dynamite roll.  Spicy tuna & yellowtail topped with crunchy spicy snow crab. WOW! Each piece was definitely a party in my mouth.  Seriously.  The flavors in this roll were INTENSE! It certainly rivaled my favorite roll from a sushi spot downtown. 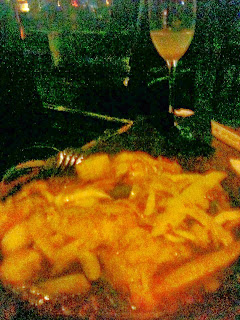 Mr. G ordered the Triple Delight.  Shrimp, sea scallop, flounder filet sauteed with fennel, yellow squash, red pepper, sweet peas & beech mushroom.  The sauce was sticky and a little sweet.  The shrimp and flounder were really good.  I didn't get a chance to taste the scallop but I'm sure it was phenomenal. 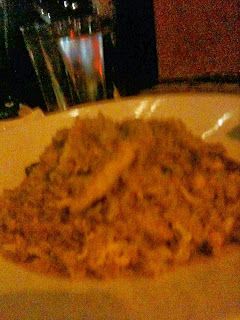 We also ordered the Basil Fried Rice to share.  Since I was so stuffed from the sushi, Mr. G did most of the heavy lifting on the rice and he was happy to do so.  We would have eaten dessert, but the waiter was so terribly slow and we didn't have the patience.