We Biked the Bridge!!

Mr. G and I had the great idea to bike the Golden Gate Bridge.  After we left Castro, we rode the trolley to Union Square.  Walked around for a bit, then hopped back on the trolley towards Fisherman’s Wharf.  When we arrived on the Wharf, we decided to stop at Knuckles at the Wharf.  We didn’t select it for it’s great cuisine, but rather for its convenience and Groupon ;-)
Knuckles is a sports bar in the Hyatt Hotel.  It was pretty empty and the waiter was very attentive.  I ordered chicken sliders with sweet potato fries.  YUM YUM YUM!  The buns were very soft and the chicken was pulled from the bone and topped with bbq sauce.  The sweet potato fries were amazing.  In all fairness, it’s hard to mess them up. 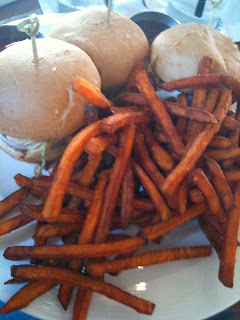 After fueling up, we walked to Blazing Saddles.  We were greeted by a very cheerful and enthusiastic group of employees who asked, “You ready to bike the bridge?!”  We followed the trail out of Fisherman’s Wharf, a quick pit stop at the first park we saw. 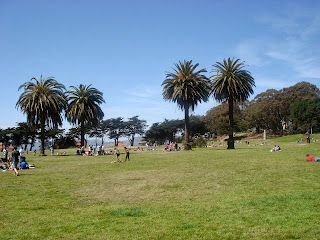 Nay the cleanest bathrooms, but what do you expect? 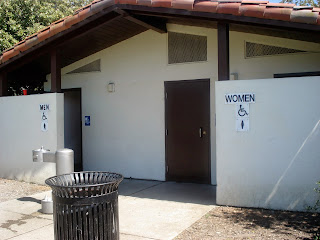 We continued our journey another couple of miles to the Warming Hut.  We grabbed a bottle of water and got ready to make it up a couple of hills to the bridge.
After riding up those hills, or in my case walking my bike, we arrive at the entrance.  It was extremely windy on the bridge and there were a lot of bikers.  Some of the professional bikers were like me in Times Square, angry that tourists were crowding up the place. Once we got across the bridge, we made our way to Sausalito, a quaint little town across the way from San Fran.  To reward ourselves for the bike ride, we stopped at the local creamery.  At Lappert’s ice cream, I treated myself to one scoop of chocolate and one scoop of cookie dough in a waffle cone. DELICIOUS! We ferried it back to San Francisco and took a cab to our apartment.  Incredibly sore and unable to move for a while, we laid about for a bit before heading out.  Unlucky for us, we were unable to locate any credible late night food.
Posted by Lady T at 10:45 PM