On the way to the Lincoln Tunnel...

Tonight we decided to celebrate Mr. G's newly found (temporary) freedom.  I recently purchased an excellent deal from groupon (no link because I want you to click on the ad! how else am I gonna get rich?)

Mr. G and I ventured down 9th ave in midtown as though we were gonna enter the Lincoln Tunnel.  Even though it was a bit of a hike, we made it.  When we got there, it was crowded inside and we thought we would not be able to get a seat.  Turns out there was an art show and we actually did have a table.  Other than the glass full length windows that opened up to allow partial outdoor seating, the decor was nothing to write home about.  As Mr. G observed, it looked like a bathroom.  It's true.  White tile walls and cafeteria style tables and chairs.  At least the water was served in a nice carafe  (could have easily been a vase) with a strip of cucumber. 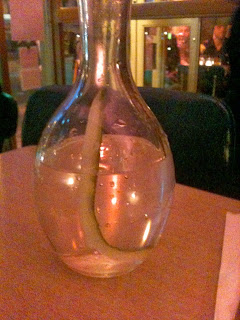 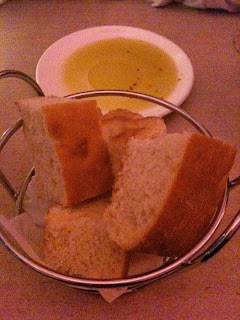 The bread and olive oil was nothing special.  We barely touched it.  We had about 3 people come over to our table before we were actually able to order.  Once we ordered, we waited, and waited, and waited some more.  Luckily we had a lot to talk about so it didn't feel like the 30 minutes that it actually was.  Finally, our meal arrived. 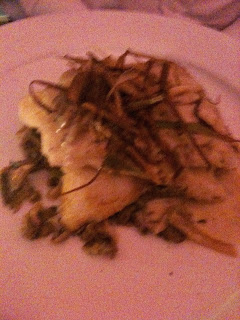 Mr. G's Atlantic Cod was served on a bed of oyster mushrooms and in a light cream sauce.  I don't usually fancy mushrooms, but the texture of the fish was a nice contrast from the mushrooms and it went well together. 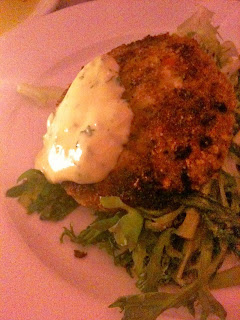 I could not decide on an entree so I ordered two appetizers.  Seared Sea Scallops served with "potato puree" (mashed potatoes!) and Crab Cake with a frisee salad and aioli.  The crab cake was delicious and went well with the aioli and salad.  I started eating that first because I was in the mood for crab cake. 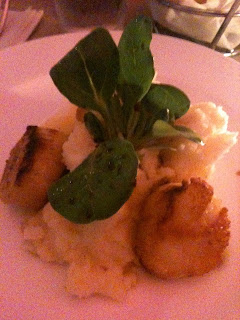 The scallops were great!  They weren't key west amazing (more on that perhaps another day) but they were rich and sweet and the mashed potatoes were perfect.  One of these days I will sear my own scallops.  There's a fish market down the street so perhaps that day will be sooner than you think.

We decided not to have dessert but I'll be sure to go back for chocolate cake.  Thanks to groupon, we got a $30 discount.  More reason for you to click on the ad...

P.S. You're correct in noting there is no lunch post for today.  I fell ill during the day and other than a can of ginger ale and a whole wheat mini-bagel, I was sans food.  Luckily I had my appetite back in time for dinner.