Although her birthday was much earlier this month, Ms. S was stuck at work on the day she planned to celebrate.  We finally got around to meeting up for what turned out to be a very delicious meal at Benihana.  I'm a big fan of hibachi.  There's something about watching them make my food that gives me great comfort.

I selected the Hibachi Shrimp which was served with onion soup, salad, shrimp appetizer, hibachi vegetables, dipping sauces and steamed rice.  I was feeling indulgent so I substituted the steamed rice for chicken fried rice. 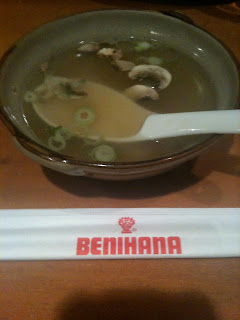 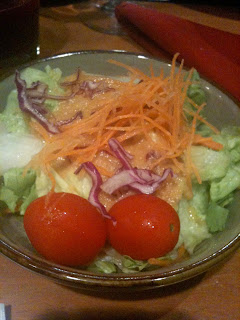 The onion soup and salad were pretty standard fare.  I was really hungry so I wasn't in the mood for these paltry appetizers.  On any other day though, I'm sure I would have enjoyed it.  Although I prefer miso soup, the onion soup was pretty good.  The salad had that delicious ginger dressing so It was pretty yummy.

Soon after the soup and salad, our chef arrived.  Pedro knew exactly what he was doing.  I have a video but I'm having a tough time uploading it. 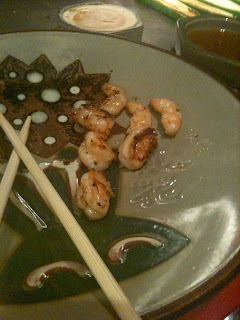 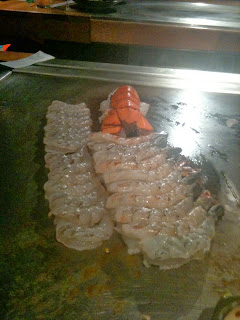 After the shrimp appetizer, I felt that I was ready to really focus on my meal. Pedro layed out several rows of shrimp and lobster.  The shrimp on the left side was used for chicken & shrimp combo meals, the shrimp on the right would eventually be my dinner!

But first, Pedro had to make the chicken fried rice.  It was a multi-step process.  My favorite step was when he made the rice look like this 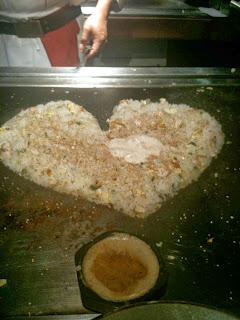 That's the teriyaki butter sauce pictured below the rice.  Pedro mixed it all up and served me a nice bowl of chicken fried rice. 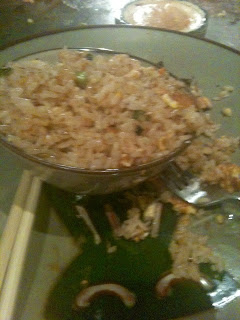 Last, but cetainly not least, he added my shrimp to my plate. 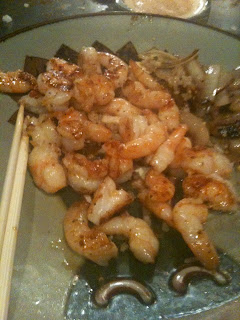 I was so happy to see that much shrimp on my plate.  I got pretty tired though and couldn't finish the shrimp and rice.  Yesss leftovers!!  Overall quite the delicious meal and hibachi is always a fun experience.  I hope I can get the video uploaded at some point so you can see Pedro's skills.