After many cancellations and rescheduling, Mr. G and I finally had dinner with Z&Z.  We ventured down to the Alta in the West Village.  Although Z&Z told us to arrive on time for our reservation, they were late...figures.

We were escorted up two flights of stairs and through the kitchen to a cozy back room that had 2 tables for 4.  It certainly felt like Z&Z had requested the table so their tardiness was quickly forgotten.  We settled down and started ordering almost immediately.  While this is another tapas style restaurant, unlike last weekend, I won't discuss the dishes in any particular order.

Without any further ado... 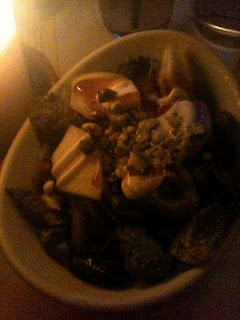 That my friends is Crispy Brussels Sprouts (although commonly misspelled brussel sprouts) fugi apples, creme fraiche and pistachio nuts.  While everyone else at the table enjoyed this vegetable dish.  I give it a big YUCK-Y! Aside from the apples, there was nothing about this that made my mouth happy.  The Brussels Sprouts were crispy because they were burned (or at least tasted that way to me).  I was not a fan of the creme fraiche, which was drizzled across the top.  It was my first time eating Brussels Sprouts and I can safely say, it's not gonna happen again. 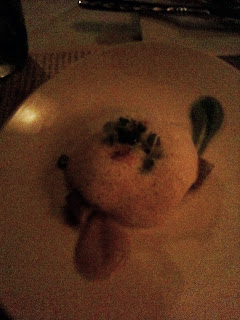 Next up, Ricotta Parmesan Gnocchi with parsnip lemon puree, Prosecco almond espuma and celery leaves.  I wanted to try this, really I did.  But the creaminess was far too much for me to even try.  Like the sprouts, everyone else seemed pleased with it. 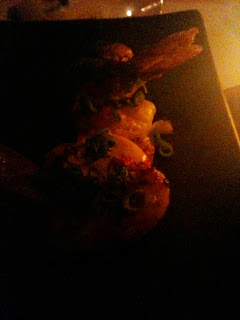 Butterfly Shrimp sauteed in brown butter, rouille, scallions & flying fish roe.  Wish I could have gotten you a better picture, I promise I'll start carrying around my flash equipped camera for these evening dining experiences.  Although I love shrimp, I must be honest that this was a little more salty than I would have liked. 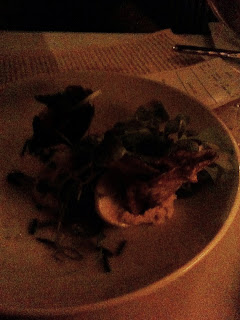 I know it's hard to tell, but those are White Truffle and Porcini Deviled Eggs, mixed field greens and celery root crisp.  All I have to say is mmm, mmm, MMMM!  The only down side is that there was only one egg which meant each of us could only eat a quarter of it.  Definitely wish I had more right now. 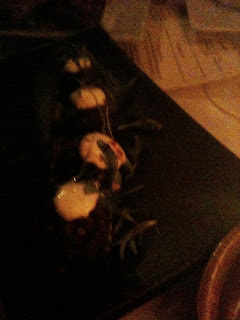 I didn't eat these but the Lamb Meatballs with spiced butternut squash foam, toasted sesame seeds and lebne were a hit!  So much so that they considered ordering it again! 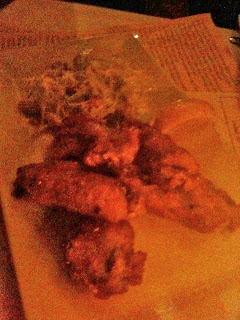 Crisp Chicken Wings with Agave glaze, chile spice blend, frisee & celery with Valdeon dressing.  As Mr. G said, "These are by far the best chicken wings I've ever had!"  The wings were indeed delicious and properly spiced.  Frisee was far less delicious.  Bitter even. blech, next time I'll pass. 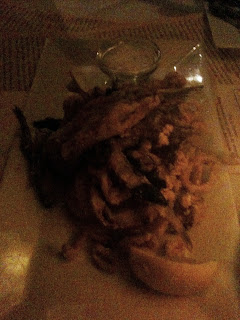 Fritto Misto de Mare (shrimp, calamari, whiting, sepia & sardine crisply fried with sea salt) So fantastically delicious.  It was like being in seafood heaven!  This was definitely in my top 3! 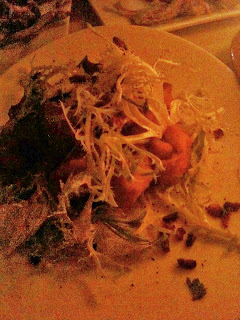 My love affair with Scallops continues.  Fried Sea Scallops with Frisee, Apple & Pomegranate with walnut oil and verjus dressing.  I've never had fried scallops before.  Heavenly!!! The batter wasn't even an issue.  It was light, barely coated and obviously in the top 3.  I've really gotta make scallops soon! 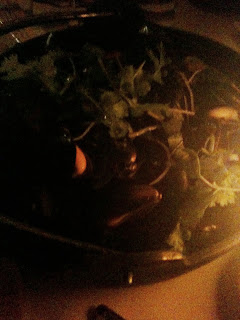 Another top 3 contender! P.E.I. Mussels in harissa lobster broth with preserved lemon & cilantro.  I almost died when I ate these.  No it wasn't an allergy, it was just. that. good.  After finishing the mussels, we couldn't let the broth pass and asked for some bread which we used to soak up the deliciousness.

Although we were plenty full, we knew we couldn't pass up dessert. 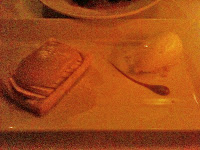 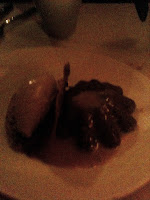 Sadly I don't recall the names of these two beauties.  I believe it was some sort of warm apple tart and caramel was definitely involved.  The other one was likely Chocolate Souffle Cake with warm dulce de leche & peanut butter center, espresso ice cream & espresso salt tuile.  All I know is we tore it up!

All in all a fantastic dinner.  Mr. Z had to go and couldn't join us for the Stevie Wonderful Party!  A tribute to the genius of Stevie Wonder.  It was an awesome party at Crash Mansion.  Lots of positive energy, good people, and great music.  Highly recommend that you go next year!