Although the day didn't turn out quite as I wanted it to, it really was a terrific day.  I arrived at work nervous about what lay ahead because I had at least 3 very active matters.  However, within an hour, 2 of those matters were downgraded in priority and I was told I could wait until after vacation.  Awesome!

So I went to lunch with Y-squared.  Now that he's home from college, he can meet me in the city for a quick lunch and I don't have to take the day off from work.  Although he initially wanted Indian food, once he arrived he decided he was down for anything.  I decided we should go to a midtown eatery that Mr. G introduced me to when we first started work. 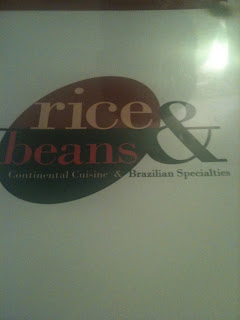 Rice & Beans is a very tiny brazillian restaurant.  Their food is on point and their lunch prices are right.  We ordered pretty soon after sitting down. I went with the 1/4 Pollo Loco - Frango Assado Com Molho Picante (1/4 roasted chicken with special hot sauce) and Y-squared ordered Ropa Vieja (Cuban Styled Pulled Beef).  Of course both were served with rice and beans and plantains!! 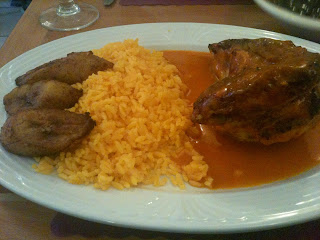 I was very impressed with the level of spice on my chicken.  It was almost too spicy for me, which rarely happens.  The plantains were sweet and not too greasy.  Yellow rice was great as were the black beans. 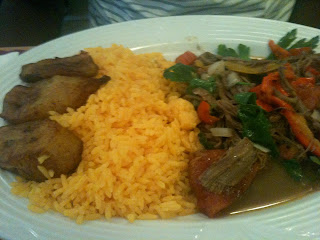 Y-squared was happy with his meal as well.  He commented that the meat was just right.  I started getting e-mails during lunch and it became evident the day wasn't going to be what I expected.  Ms. G showed up about 2 hours afer Y-squared left.  I was still working so she went to visit a friend.  Next thing I knew, it was 6:30, I was still in the office and Ms. R was on her way!  I finally made it out of the office around 8:30.

Ms. R and I went to Saigon Grill and Ms. G joined us shortly after.  Although I was stressed out by the day, I was thrilled to be with 2 of my top 5.  I used to order from Saigon Grill while I was in law school, but it wasn't until February of this year when Ms. O (not the one featured here before) suggested that we go to the restaurant.

They have a VERY extensive menu.  It's pretty hard not to find something you want to eat here.  Since we were starving when we arrived, Ms. R and I ordered two appetizers.  Steamed crystal dumplings with shrimp and Goi Muc (assorted baby greens with calamari with slightly spicy tamarind dressing & crushed peanuts). 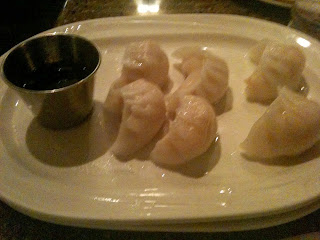 We were reluctant to order the dumplings because we weren't sure what "crystal" meant.  They were just regular dumplings.  The sauce was very thin and didn't add much. 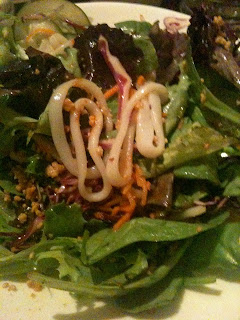 The calamari salad on the other hand?! We definitely underestimated it when it arrived.  Once we took the first bite though, it was a wrap.  The tamarind dressing was remarkable.  We cleaned up that salad.  Ms. G arrived right as we were diving into the appetizers so we ordered our entrees. 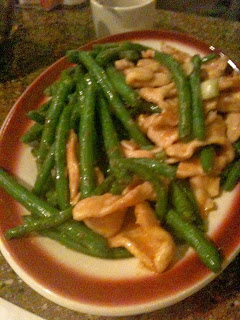 Ms. G went with the Ga Xao Dau Que (sauteed sliced chicken with string beans in garlic sauce & a touch of peanut oil).  She noted that it was really good. 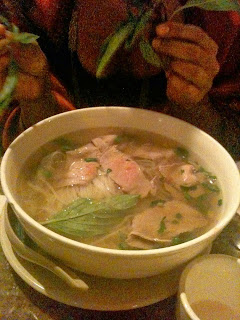 Ms. R, being the vietnamese cuisine lover, went with Pho Bo.  A hearty ox tail soup with rice noodles thin slices of beef & onion.  It was served with bean sprouts, basil & hoisin dipping sauce on the side.  Although it wasn't as hot as she would have liked, she looked very satisfied at hte end of the meal. 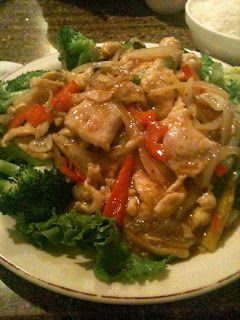 I ordered Spicy and Tasty Chicken, sauteed sliced white meat chicken with bell peppers and onions in a spciy and tasty sauce served on a bed of steamed broccoli.  Although the picture looks a little slimy, I assure you this was not a greasy meal.  The broccoli was still crunchy which was great.  The chicken was well seasoned but not as spicy as I would like, it was very tasty though.

After we finished our meal, we went back to my place to drop off some things then headed out to Hotel Empire rooftop to meet up with Mr. G.  Quality time with my brother, hanging with 2 of my besties and chillin with Mr. G - yup definitely a terrific thursday!