Still in DC and had time for a quick lunch with some coworkers I don't see too often since they're in a different office.  I had planned to go to one of my fav thai spots in the district, but the rain put a stop to that.  We went to a restaurant not too far from the office.  Mackey's is apparently popular among the attorneys.  We saw a group of partners there while we were eating.

I was tempted to order the Tuesday special, a soft taco plate.  But one of my colleagues reminded me this was an Irish pub and perhaps that wasn't the best idea.  I went with the Chicken and Chips. 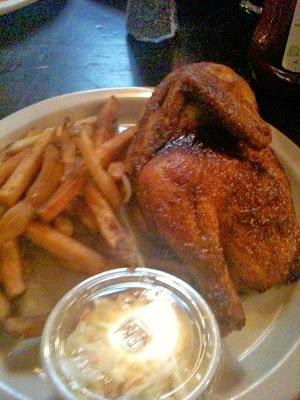 A nice oven roasted half chicken.  The seasoning was okay, nothing special.  The meat was extremely tender and really was as they described, fall off the bone good.  The fries were okay, but I'm not really a big fan anyway.  The cole slaw was surprisingly delicious.  I ate every last bit and hoped that my coworkers would hand over theirs, but no chance.  C'est la vie.

Hopefully I can get on an earlier train and maybe meet up with Mr. G for a quick dinner.