I was fortunate enough to receive a dinner invite from Ms. H.  Her father, one of my favorite grown-ups, is coming into town!  I'll be in Virginia for the weekend so we made a 10:45 dinner reservation at Blue Smoke.  I was really excited to try Blue Smoke, especially since the menu looked SO GOOD!

Ms. H and I arrived on time and unfortunately it was evident Mr. H wouldn't be arriving for some time.  We decided we should order a couple of appetizers to get things going. 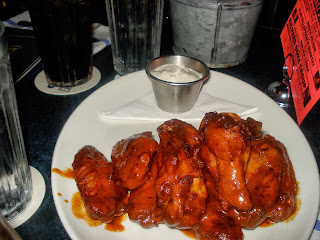 The Chipotle Chicken Wings were FANTASTIC! Seriously, I must say they even beat out the wings from a few weeks ago.  Sorry PIC! They were juicy, drenched in spicy deliciousness and the perfect appetizer!

I was less than impressed with the Deviled Eggs.  They were a little salty and while they had a little kick to them, it wasn't anything special. 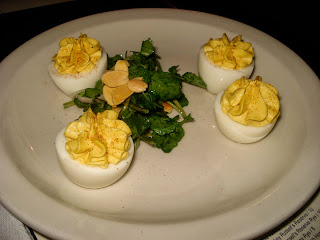 After a short while, Mr. H arrived and BOY were we excited!  It was great to see him after so long (and it meant we could finally order our entrees!)

I went with the Applewood-Smoked Organic Chicken with Mashed Potatoes.  I skipped the Crispy Onion topping, just wasn't interested. 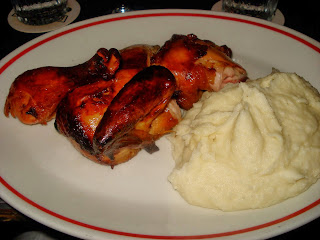 Sad to say but I was disappointed with the chicken.  Maybe it's because the wings were so good.  The chicken required too much work.  It was dry-ish so I had to pour on the BBQ sauce.  I don't go out to eat so I have to do the work.  While they're BBQ sauce was better than the Kraft sauce I used last week, IMHO my chicken tasted better.  There.  I said it.  The mashed potatoes were good, but again I'd go with my potato wedges anyway.

To wash away the disappointment, I ordered a Hot Fudge Brownie Sundae.  Warm brownie with vanilla ice cream topped with hot fudge and whipped cream.  Unfortunately, I didn't notice that the menu said it was served with toasted walnuts. 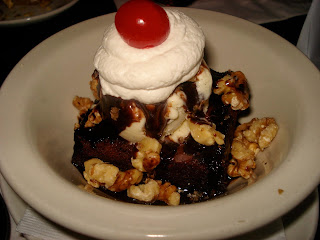 I mostly ate around them, but even if the walnuts weren't there, I don't think I would have enjoyed it that much.  The brownie was good, but not great.  I was happy it was served warm though.  Few things as good as a warm brownie with cold ice cream.  Mmm Mmm Mmmmmmm!

Apparently, it wasn't as good as the Banana Cream Pie that Mr. H  and Ms. H shared. 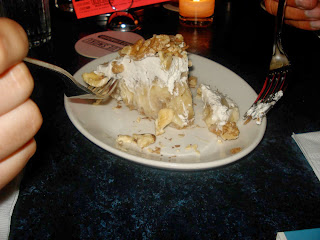 Look at them diving in!  They cleaned the plate.


Blue Smoke was good, but not great.  Perhaps if I ate beef or pork I would have enjoyed it more.  Ms. H loved her ribs and remarked on how great they tasted.  Mr. H also looked satisfied with his Hamburger.  As a poultry and fish girl, I was impressed that there were so many options on the menu.  Chipotle Chicken was delicious the Smoked Chicken not so much.  While not the best meal I've had, I would go back and I'd definitely recommend it for those with a wider range of protein options.