After a day of driving around the Sonoma countryside, Mr. G and I were looking forward to our dinner in town.  We requested that our concierge find us a seafood restaurant and he referred us to Sonoma-Meritage.  Unfortunately, this was not the pleasant experience we were expecting.

We arrived to a mostly empty restaurant and figured the fact that it was midweek was probably the reason it was empty.  After being shown to our table, we were served some less than stellar looking bread.  It was cold and did not look appetizing.  Heating up bread should be a standard at all restaurants.  After all, it is pretty effortless to place bread in the oven for a few minutes. 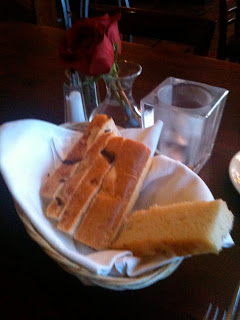 After staring at the bread for almost 10 minutes, our server finally showed up to take our orders.  Nothing on the menu was that exciting, but we finally settled on a few items. 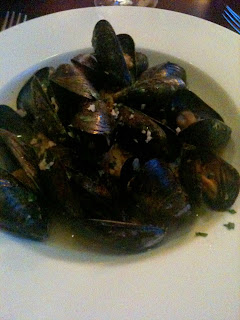 To start, I ordered the mussels in a garlic wine broth sauce.  Looks pretty good right?  Almost like they gave me too many mussels.  Wrong!  Although the mussels tasted pretty good, at the bottom of the pile  was a big loaf of soggy bread.  Yuck! 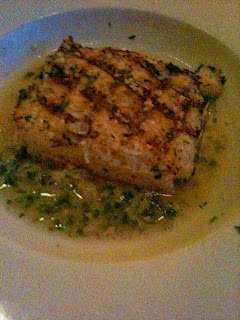 Mr. G went with the lobster bisque and although it looked like pumpkin soup, it turned out pretty good. Albeit lacking in any bits of lobster.

For our entree, we both ordered black fettuccine with clams, mussels and in a spicy tomato sauce. 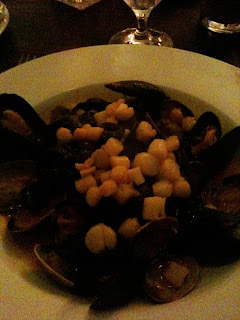 The pasta was very fresh and the mussels were delicious.  There were too many clams, but perhaps that's because I have eaten so much seafood this week.  The sauce was not that spicy, but it's not shocking that I would find sauce not spicy enough.

Since we were staying at the Fairmont, we received complimentary desserts.  Chocolate torte with vanilla gelato and creme brulee sitting on top of strawberries. The chocolate torte presented nicely, but Mr. G found a random peanut inside.  Not cool.  Luckily he's not allergic.  The gelato tasted old so that wasn't too good.  The creme brulee was strange because it wasn't in a plate which is what I'm used to seeing, it tasted alright but was a little too mushy for my liking. 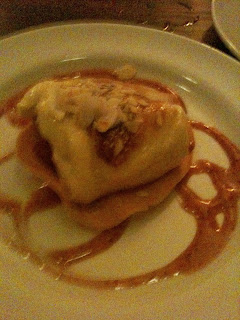 Overall, meritage was not as delicious as I had hoped.  The food was subpar and lacked creativity.  The ingredients did not taste quite as fresh as everything else we've been eating this week.  Considering the concierge directed us this way, I'm hoping this was an off night and that others who dine here have a better experience.