After driving around Sonoma County looking for an afternoon meal, Mr. G and I stumbled upon Yeti a restaurant specializing in Indian and Nepalese cuisine.  Initially we were a little reluctant, but one we smelled the food, we knew we were in for a treat.

Yeti is a very large restaurant that also offers the option to dine on their outdoor deck.  Of course, that's where we decided to eat.  We started off by ordering samosas.  The delicious little pastries are stuffed with potatoes, green peas, and bell peppers lightly spiced with garlic, ginger and cumin.  It was served with sweet tamarind and mint sauce. 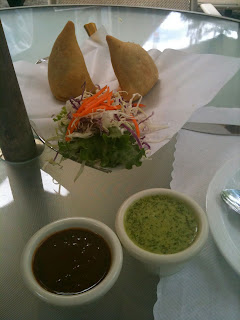 These samosas were larger than life and filled to the brim.  The pastry was harder than most samosas I've eaten, but they still had a unique non-greasy taste.  There was a soft hint of ginger and cumin, but I couldn't really taste the garlic.  I enjoyed dipping the samosa in the tamarind sauce.

For our entrees, I ordered Chicken Vindaloo and Mr. G ordered Fish Tikka.  The mahi-mahi was presented on a sizzling platter.  It was marinated in yogurt, tomatoes and garlic.  The onions and other accompaniments didn't appear as though they had been cooked with the fish, but they still had some level of flavor. 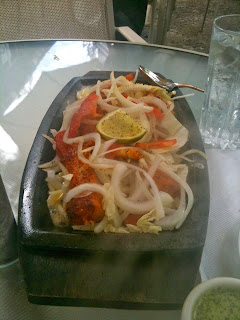 The vindaloo was just how I liked it.  Spicy spicy spicy!  It was served in a little pot with chicken and potatoes soaking in the sauce.  Our meal was served with basmati rice, but we also ordered naan. 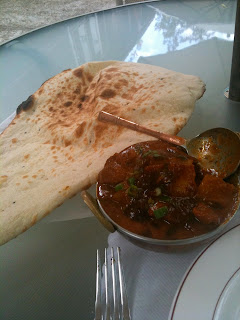 I never thought that Sonoma County would be the place where I found great Indian food, but so far everything we've eaten in Sonoma has been terrific!  Looking forward to another great meal tonight.