After dinner, we speed walked in the windy and rainy New York night to 53rd and Broadway to see Promises, Promises.  I was extremely exhausted but not willing to give up my ticket.  I figured if it was terrible, I would catch a nice nap or leave early. 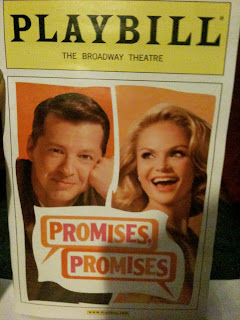 A brief synopsis for those who don’t know anything about it.  Set in Manhattan in the 1960s, the show is about a young, single, man employed at a life insurance company.  He gives the key to his apartment to several executives at his office so they can use it for their evening romps with their mistresses.  He receives great reviews from these executives and eventually gets a promotion.  He falls for a woman he works with, who is of course having an affair with one of the executives.  Of course, in the end everything works out and the show ends with them singing and happy.


Does that sound bad?  Well, even if the plot is not that great, the actors were fantastic.  Sean Hayes, as Chuck Baxter, did a phenomenal job.  He was really funny, but kind of goofy.  Almost as though he was still on TV.  His voice was pretty good.  Kristin Chenoweth, as Fran Kubelik, tore down the house.  For such a little woman, she has a HUGE voice.  She did a great job with “I Say a Little Prayer and “A House is Not a Home.”


Generally, the first act was slow moving and lasted too long.  Aside from Kristin’s songs, “Turkey Lurkey Time” and “Where Can You Take a Girl?” were very entertaining.


The second act opened up quite well with Katie Finneran playing Marge MacDougall a lush who is throwing herself at Chuck.  She had some rather hilarious lines and that woke me up.  Dick Latessa played Dr. Dreyfuss and he was also hilarious.  Hands down, the comedy part of this musical comedy was definitely in the second act.


Overall it's a good show, but it probably shouldn’t be at the top of your list if you’re looking for shows to see.  If you do go, I can assure you Hayes and Chenoweth will not disappoint!
Posted by Lady T at 11:45 PM