Braised Halibut with Spinach and Mushrooms

After spending almost all of my food budget in the first half of the month, I knew I had to switch it up for the rest of June.  I took a quick trip to Whole Foods after work today with hopes of stumbling upon something delicious.  There was a sale on Halibut, so I decided that even though I had never made it before, that would be my main course tonight.

Spinach is pretty easy to make so I figured I couldn't go wrong on that.  Especially since Mr. G and I made that while we were in SF.  While waiting on the check-out line, I picked up a Food & Wine magazine.  Lo and behold one of the recipes in there was for Halibut.  I decided that I would do a modified version of the Braised Halibut with Mushrooms and Shrimp recipe.

In a large pot, heat 2 tablespoons of the olive oil.  Add the spinach, salt and pepper then cover.  After 2 minutes, uncover and mix around, cover again.  Repeat until spinach is wilted, but still very green. 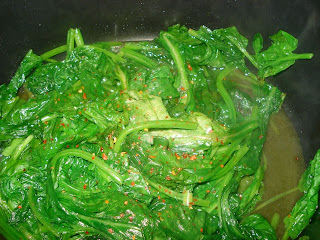 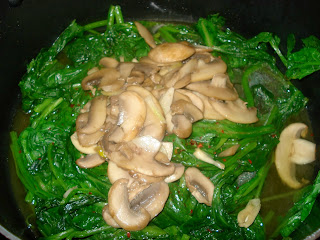 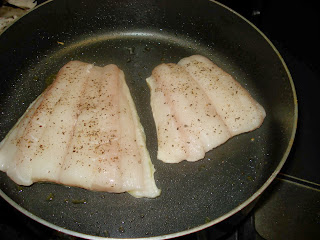 Add the white wine, cover and cook until halibut is just white throughout, about 2 more minutes.  Voila!  For added flavor, you can combine the spinach and mushroom in the same skillet as the halibut so the juices run together.  I was too hungry so I plated the fish and added the vegetables. 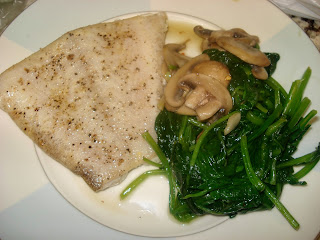 This was a very quick recipe and did not take long to make at all.
Hungry yet?
Posted by Lady T at 12:12 PM