I haven't seen my PIC in ages.  Ever since he went down to Fuqua, he's been too good for the Northeast.  Thankfully, he graduated a few weeks ago and before he goes to start his fancy new job in Cupertino, he decided he'd make a quick trip with to see me in NY with his friend Mr. R.  Yay!  At the request of my PIC, I suggested several french/italian/mediterranean restaurants.  He ultimately selected Cafe Champignon.  Lucky for me, it is a block and a half from my physical therapist.
I arrived just in time for our 7:30 reservation.  There was a table opening up outside so we decided that would be the best spot to take in the streets of Chelsea and enjoy our meal.  I have to say I'm impressed with the various options on the menu as well as the price points.
We decided pretty quickly what we would eat.  While we were waiting, some bread and olive oil arrived.  The bread was not warm, but it still tasted pretty good.  Since there were 3 of us and 3 olives, I was pressured into trying one.  As a first time olive eater, I must say I don't see what all the hype is about. It was very salty and tasted like a grape reject. 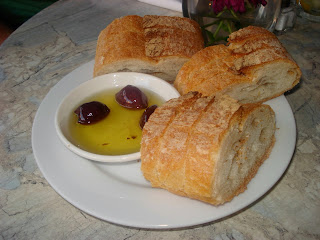 Our appetizers soon arrived.  Mr. R keeping it healthy went with the salad.  He didn't leave a single leaf on the plate, so it must have been good. 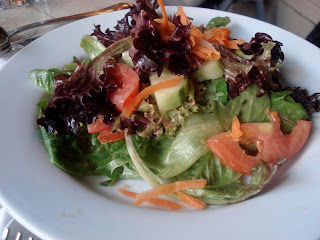 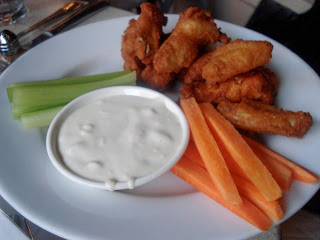 I'm usually skeptical when I see "cajun" on a menu at a place that is definitely not advertising that kind of cuisine.  I was pleasantly surprised to see that they were not burned and in fact were some of the most delicious wings I've ever had the pleasure of eating. Delicious!!
Classy as I am, I went with the Escargot. 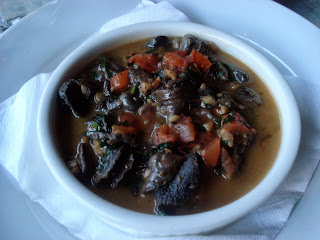 It was incredibly tasty.  Sauteed with garlic, parsley and tomatoes in a butter wine sauce.  Spectacular! The parsley was particularly good and I don't think the meal would have tasted the same without it.  I was also pleased with the portion.  It was definitely a shareable appetizer.  The sauce was so good that we asked for more bread so we could sop it up.
On to the main course.  Mr. R, the carnivore that he is, went with the hanger steak (rare!) just kidding he asked them to cook it a little bit.  He seemed very pleased with his meal and remarked as such. 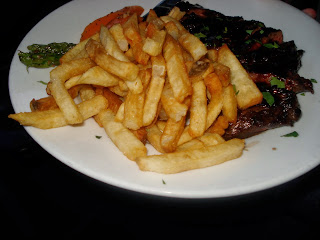 My PIC ordered the chicken picatta. 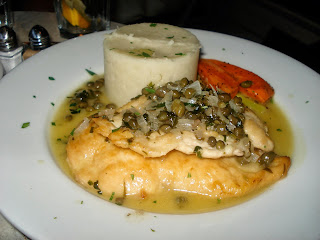 It was sauteed with capers and lemon sauce served with mashed potatoes.  The chicken, according to PIC, was overcooked but the sauce saved the meal. 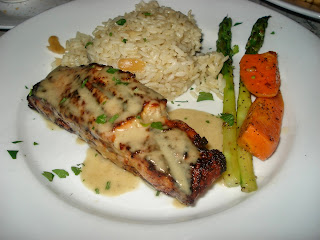 My entree was fantastic.  Grilled Atlantic Salmon with lemon sauce.  The fish was medium well and the sauce was perfect.  The "spiced rice with toasted almonds" that accompanied my salmon was less than impressive.  The rice was rather dry.  I was a bit shocked because the salmon was so good.  IMHO, that rice did not deserve to be on the same plate as the salmon.
Overall, Champignon was a pleasant surprise.  The food was good, portions were large and the company was great!  I recommend trying it out if you're in the neighborhood, but I'm not sure I'd go out of my way to get there.
Hungry yet?