We spent our last day in SF walking around the famed Haight-Ashbury neighborhood towards Golden Gate Park.  After eating so much this week, we decided to take it easy for breakfast with left overs.  That meant by lunch we were starving!  On our way to the park, we stumbled upon The Citrus Club.  There was a Thai restaurant next door, but Citrus Club smelled so good, we couldn't help but head in there. 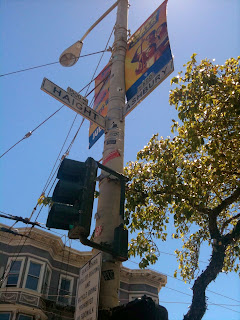 The Citrus Club bills itself as "an Asian influenced noodle house" so of course we had to order noodles.  I ordered the special.  Malaysian pineapple and shrimp over egg noodle.  The wok-tossed garlic, ginger, shrimp, pineapple, carrots, red bell pepper, baby corn was cooked in tamarind sauce. 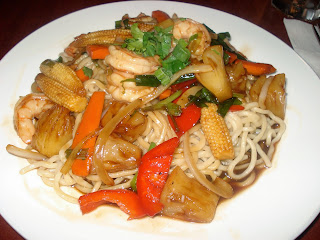 This meal confirmed my love for tamarind sauce.  I am determined to buy a bottle and coat everything I eat in it.  I was so happy with this meal.  I ate every last bite and would have gladly licked the plate if it didn't mean I would embarrass myself.  I definitely plan to recreate this meal.  The pineapple was a surprisingly positive addition.  I thought it would throw off the meal, but in fact it added a sweetness that was much appreciated. 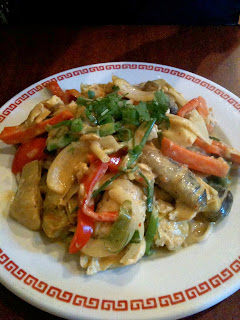 If I was in a curry mood, I would have ordered his meal.  The coconut curry was not overwhelming like so many others that I've tasted. Instead, all the ingredients blended well together. If I were to make this at home, I would probably use less vegetables and more chicken.

Yup Citrus Club hit the spot and really helped fuel us for a fun afternoon in the park!