When we first booked our stay at the Sonoma Mission Inn, we added a reservation for the Inn’s restaurant.  The menu was rather impressive as were the servers.  They definitely knew their stuff. 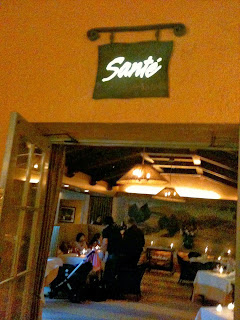 Our waiter came to the table and walked us through the menu and included his recommendations.  It took us a while but we finally settled on a few items.  While waiting for our food, the server brought out the chef's amuse-bouche. 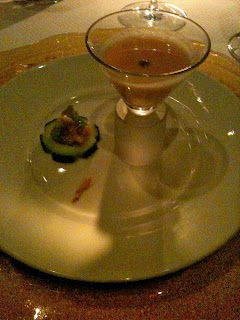 I recall he stated it was a chickpea soup with another ingredient that I cannot remember.  It also included a salmon tartar served on a cucumber.  The chilled soup was terrific.  I normally don't like cold soup, but this was amazing.  The chickpea was well blended and the soup was smooth.  It was just the right amount of food to whet the appetite and get ready for a fantastic dinner.
We started off with two appetizers Diver Scallop and Grown Up Mac n Cheese. 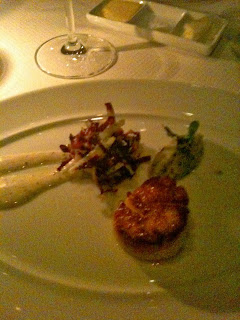 The Seared Diver Scallop was served with a smoked marinated scallop tartar radicchio and jicama salad with a whole grain mustard emulsion.  It was very rich, but thanks to the radicchio and jicama salad, the appetizer was not overwhelming.  The sauce was especially delicious and I sopped it up with the freshly baked bread that the servers kept bringing around.  The bread was served with two butters, both freshly churned. 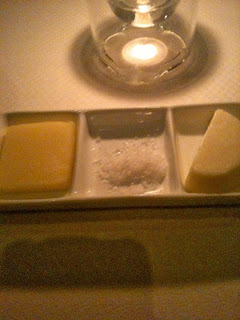 As a non mac n cheese eater, I must say that the Grown Up Mac n Cheese was phenomenal. 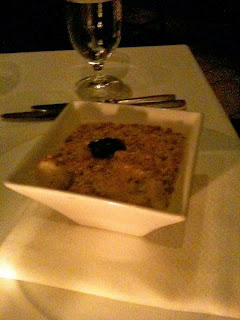 It included freshly made pasta shells, black truffles, lobster and fontina val d'aosta cheese.  The creaminess was far more enjoyable than I expected.  The cheese blended nicely with the truffles and the pasta was remarkably fresh.  Again, the bread was very useful when it came to making sure the plate was empty.
After about 20 minutes, our entrees were served.  Some people might be put off by the amount of time, but the waiters were very attentive and it was evident that the timing was deliberate.  After having such rich appetizers, I was glad that we had some time to let the food settle before the main course.  The waiters came out with our main course and explained every last item on each plate. 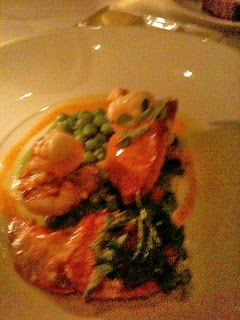 The Butter Poached Maine Lobster was served with sweet carrots, english peas, carrot buerre mote and pea shoot salad.  Lobster has never tasted so good.  I’m embarrassed to say that I was not able to finish the lobster.  It was incredibly fulfilling.  The buttery goodness of the lobster was well contrasted by the semi-crunchy pea shoot salad. I couldn’t have been happier. The Roasted Sonoma Duck Breast was phenomenal.  It was served with braised swiss chard, duck confit and sunchoke stuffed onion and port wine duck jus.  It was cooked well, but very moist.  There was also a crispiness to the skin that made it that much more delicious.  I didn’t taste the swiss chard or duck confit, but if they were coated in the same sauce as the duck, I’m sure it would have been excellent. 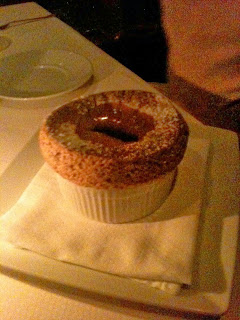 Although we were stuffed to the brim, it was only right that we ordered dessert.  There were many incredible options, but we went with the Chocolate Soufflé.  I never realized just how fluffy soufflé can be.  It was almost like sponge cake but lighter and fluffier.  It was incredible, but unfortunately we were not able to finish it.
After finishing up our dessert and tea, the waiter brought out complementary sweets. 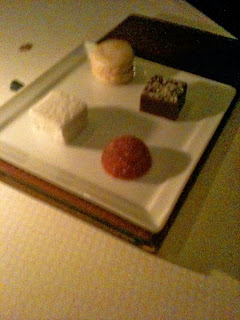 Salted chocolate, strawberry jelly, vanilla and buttermilk macaroon and almond flavor marshmallow.
Dining at Santé was an amazing culinary experience.  From the moment we walked in, the employees warmly welcomed us.  They were all very knowledgeable about the food and genuinely enthusiastic about the food.  We were there for about 2 ½ hours and it was worth every moment.  If you’re ever in Sonoma, I recommend dining at Santé.  They are the only AAA rated 4 diamond restaurant and received a Michelin star this year!  It also helps that their chef used to work at The French Laundry!