Although I mean to, I usually don't eat breakfast at home in the morning.  Most mornings I'd rather sleep for an extra 10 minutes than make something to eat.  Today, however, was a little different.  When I woke up, I realized I had already received several e-mails and conference calls overseas were being scheduled.  Yuck.

Knowing it would be that kind of day, I decided to make some breakfast so my brain would be properly charged to make it through the day. 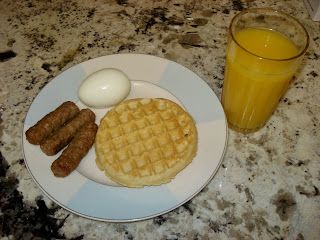 Nothing too fancy.  Two waffles, a boiled egg and turkey sausage.  Buying prepackaged food is a good idea for those mornings when I'm in a rush.  I recommend you do the same so you can fuel your brain in the morning.  That, or wake up earlier than I do!