I have seen Ms. Badu in concert three times in the last 3 years.  Each performance was different.  Nothing can top her show at Radio City Music Hall. I mean seriously she killed it.  Last year at Governor's Island, she did a great job.  After all it was an outdoor venue, summer night, different kind of crowd.  Great times and she was feelin it.  Last night though, not at her best.
I won't even bother discussing how long it took her to take the stage for her 8pm show.  I'll let others tell you. Instead, I'll stick to the show itself. She came out after a 10-15 minute intro which included her music video.  Really Erykah? I could have stayed in the office and watched it on youtube.  She came on stage with less energy than she normally does, didn't address the crowd until after 10 minutes.  I was not impressed.
Her voice is of course remarkable so I have to smile every time I hear it.  It was hard to tell what kind of mood she was in.  Not too many songs from the new album, but not a lot of the old jams either.  It was hard to follow and didn't really seem that well put together.  Of course no offense to her because she is incredibly talented and can sing the hell out of any of the songs she chose, but I was really expecting better.
She was also on stage for about an hour, if not a little less.  As a huge fan, I felt cheated.  It was a monday night and while I didn't have to go far to get to Roseland, she still could have laid it down a lot better. 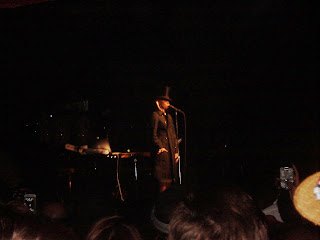 Cute top hat though and I love the shirt.  Next time she's playing I'll probably still go but I"ll be sure to show up more than 2 hours late.
Posted by Lady T at 11:59 PM